In its short history Seapoint has hosted four championships, The Irish Youths, two PGA Championships and The Irish Close Championship along with a host of other important tournaments. Therefore, there can be no doubting the quality of the challenge presented.

Planning permission for the construction of the links at Seapoint, designed by Des Smyth and Associates, was granted in early 1990. It is important to note that the Company was comprised of Des Smyth, Declan Branigan, Barry Reddan and Joseph Cummins and all parties contributed to the design of the Links. The Design team was then awarded the construction and grow-in contract under the direction of Declan Branigan and construction began on the 1st of July 1990.

Pat Fallon Plant Hire, a Termonfeckin based company, was employed to carry out the construction work. Such was the level of machinery that they devoted to the site, all of the earthworks was completed by the end of September and the links was prepared for seeding and then seeded prior to the winter of that year. This was a troublesome time as the irrigation was not installed until 1991 and strong winds wreaked havoc at times giving rise to multiple areas being reseeded a number of times. Nevertheless, the grow-in was concluded successfully and the first golf ball was struck in anger at Seapoint on the 1st June 1993. The links was young and raw at that time with severe rough but as time progressed, many golfers began playing the links and the membership began to grow. In the meantime, the Clubhouse was constructed in 1994, now the venue had all that was required to be a success.

The links matured quickly and in it`s 3rd year of play Seapoint hosted the Glen Dimplex, a professional match play tournament, and many of Europe`s finest professionals participated. The tournament was the brain child of Lochlan Quinn, one of the 5 Promoters of Seapoint, the other four being Louis Noonan, Mat Doolan, Charlie Smyth and Paul Burke Kennedy. The winner was one Des Smyth who defeated Paul Mc Ginley in a quality final on the 18th hole. This was to be the first of many important tournaments to be hosted by the Club. 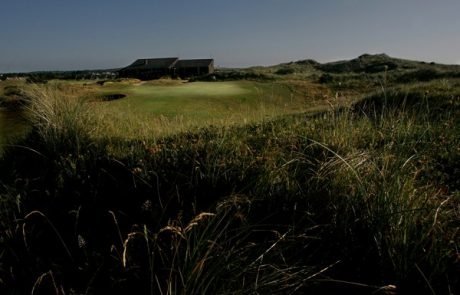 Probably the most important date in the history of the Club was 1996 as this was the year of the buy-out from the Promoters. All formalities were dealt with expediently and by the end of 1996 Seapoint was a member owned Golf Club. The Promoters retained all of the lands zoned for building and such was the speed with which houses were erected it is safe to say that Seapoint was in demand both as a place to live as well as to play golf.

In 1997 incidents of interaction between the game of golf and the houses gave rise to a lot of concern and it was agreed that some design changes were required to provide more safety for householders. This redesign as carried out in 1998 and resulted in the present 2nd, 3rd, and 6th hole replacing a par five 2nd hole and a par 3 fifth hole. The old fifth and 6th holes were amalgamated to give the present 6th . the Promoters paid for all work carried out. Despite the problems of that time the Club hosted the Mac Gregor Leinster Ladies Championship in 1997.

The Glen Dimplex and the Ladies Championship were major events but from very early on the Club hosted many Leinster Branch divisional events and the Links always produced worthy winners.

This was a very busy period for the Club as during this period the Club hosted a number of very important events and at the same time undertook a major overhaul of the clubhouse. In 2002 the Club hosted the Irish Ladies Senior Championship in late June/early July and this was followed by the Irish Youths Championship in August. The Youths was preceded by an international match between Ireland and Wales. Whereas this was an extremely busy time for the Course Staff, this was more than balanced by the fact that Seapoint was in demand for major tournaments.

In 2007 the members voted to accept plans for an extension to the Clubhouse drawn up by Mr. Brendan Cashel and whereas this work impacted somewhat on the business in the Clubhouse, the Links was now held in high esteem and was ranked within the top 50 Clubs in Ireland where it remains to this day, number 44.

The next major Championship to visit Seapoint was the Irish PGA Championship in 2010. The tournament was won by David Mortimer who prevailed by just one shot over European Tour player Damien Mc Grane. Mortimer earned his win by holing an eagle putt on 18 after Mc Grane lipped out with a short chip. Mortimers total of 11 under par for the 4 rounds was impressive and Seapoint was now entitled to call itself a Championship course. Such was the success of the 2010 PGA, the event was again held in Seapoint in 2011. The course played hard and fast for the tournament and produced a very worthy winner in Simon who registered an unbeatable total of 269, 19 under par and left all other competitors floundering in his wake.

Whilst there is no doubting the honour that the hosting of all tournaments to 2011 bestowed on Seapoint, the jewel in the crown arrived in 2014, the Irish Amateur Close Championship, better known as the Irish Close. Of the 6 major amateur championships in Ireland, The Close is the only Championship that is not designated to a given Club. It visits each Provence on a 4 year cycle and, given the number of quality golf courses in Leinster, it was a huge honour for Seapoint to be selected to host this tournament. The challenge presented by the Links was evident from the very start with a total of two over par leading the qualifiers into the match play stages. The event concluded with a one hole win by John Ross Galbraith over the veteran Pat Murray from Limerick.